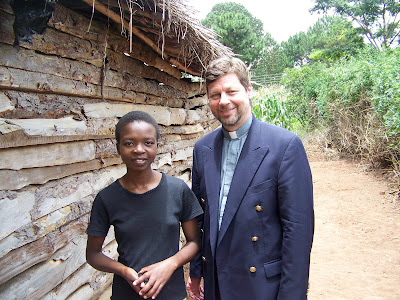 It's the end of the month and the HopeHome in Mzuzu, which cares for 86 orphaned and abandoned children, is down to $11.31 in their bank account. We need to send another $1000 next week to meet November's budgeted expense for food, blankets and school fees.

The Hope Homes and Hope scholarship account received MK139 000.00 (US$985) in September from WorldHope Corps and the subsequent is our expenditure breakdown.

Our joy and appreciation for the succour that you accord us is unfathomable and we commend you to the Lord Jesus for lasting blessings. Bless all the friends that stand around you in doing this noble service.

You can always look forward for the manifestation of fruit for God out of this program.

Note that we bought 20 blankets for the 22 children that were not given blankets when we distributed blankets in June 2008. We remain with only 2 children now without blankets.

Love from
Copeland and Leaster, Peter and Darlison 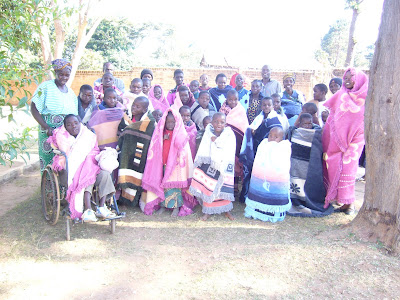 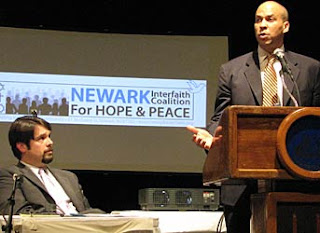 Newark, NJ: It happened again this week. Two people were killed and four wounded in a drive-by shooting on Friday afternoon, October 24, near public schools in Newark-- New Jersey’s largest city. According to police reports, at least 3 people in an SUV drove around the city firing randomly at pedestrians, including a 20-year-old male and 24-year-old female who died. A ninth grade girl and a 16-year old boy, along two others, were also shot, but survived. This was the latest incident in a series of violent crimes over the past few years in a city known for gang violence and systemic poverty.

Eighty-three people were murdered in 2007 and 52 so far this year, according to a New York Times article published on Saturday, October 24. What the news media did not report were on-the-ground reports of unwarranted police actions in a neighborhood conflict the aftermath of the shootings. According to David Kerr, President of Integrity House, “there was a group of street people and ministers marching around each of the scenes of violence both yesterday and today, praying and calling for peace.” Their presence on the streets was not appreciated by police who over-reacted, and one officer may have committed assault. Clearly, there is a need in the city for solidarity among neighbors, peaceful demonstrations of concern, mutual understanding, conflict resolution, and a social transformation of the systems and structures that give rise to poverty, addiction, youth violence and despair.

Newark is also “a city of peace and strength” said Mayor Cory Booker, who recently helped local religious leaders launch the Newark Interfaith Coalition for Hope and Peace focused on engaging gang culture and reducing youth violence. Drew University and Communities of Shalom was one of the founding members of the Coalition last Spring. David Kerr, a member of the Coalition, offered the following perspective in a letter to local religious leaders:

“Many if not most gang leaders and members want the same things we all do, jobs, security, food, shelter and safety and a sense of family and community. From the mouth of gang leader, Akintola Hanif talking about the recent film "Moral Panic": "When you give people a chance and equip them with the skills necessary to build a life, they do it. These kids don't want to die."

The Newark Interfaith Coalition of Jewish, Christian and Muslim leaders from the greater Newark area was formed to explore ways of engaging gang culture to reduce youth violence in the city of Newark. Working with city officials, these religious leaders are engaging other city organizers and city officials to consider the ways existing resources may join with religious organizations in the greater Newark area to strategize about new possibilities of action in Newark neighborhoods, working collaboratively to support and strengthen existing efforts and promote the efforts to lead from violence toward peace.

The first public event of the Interfaith Coalition was held on April 3 at the Newark Symphony Hall. City leaders from non-profit organizations, social services agencies, churches, mosques, temples, and other religious organizations were invited to hear and discuss presentations by Newark-based former gang members and parents of gang members, and by two guests: Rev. Jeffrey Brown, one of the founders of Boston's Ten Point Coalition and Imam Earl El-Amin from the Muslim Community Cultural Center of Baltimore, Maryland, both models of grassroots religious-based programs which have transformed gang violence in those two cities.

“Recent highly-publicized events have brought deserved focus to long-standing issues of violence in Newark often resulting from grief, addiction, abuse, depression, despair, hopelessness, and fear. Many public, private, and religious institutions have addressed these important issues. Faith tells us to "seek the welfare of the city," and we want to be a more effective part of ongoing efforts to address this multi-level challenge,” said Bishop Mark Beckwith, Presiding Bishop of the Newark Episcopal Diocese and one of the organizers of the coalition.

A second major Coalition action was the co-sponsorship of “Bradley Court Day” –including a resource fair and interfaith prayer service—on July 21, 2008. Bradley Court is a large public housing complex known for drug dealing and gang activity and in need of social services and resources to help raise the quality of life in the neighborhood, and bring peace and hope to the city of Newark. Integrity House and the Bradley Court Tenants Association, with the support of the Newark Interfaith Coalition for Peace and Hope, and many other groups including the City, Fire Department and Police Department, joined efforts and mobilize resources to offer on-site opportunities for rehab, employment readiness, and truck-driving jobs for those willing to sign on for training.

According to Kerr, “One thousand people were there to feel this show of humanity and love and joy and safety under the torrid July sun. There were job opportunities, and sprinkler fun and animals to pet and great choirs and singers and over a dozen addicts brought out in a van for detox thanks to Bethel Outreach Ministries. There were 70 children getting their hair cut and styled. There were men and women of faith and there were prayers. There were children having fun and adults showing love. It is significant that all this was done in their neighborhood. We witnessed peace and love replacing distrust and anger.”

New actions currently are being considered by the Newark Coalition for Hope and Peace in response to the recent youth violence. A group calling themselves “Nine Strong Women” have emerged with a determination to make a difference in the city. ShalomZone training has been requested and offered. And Jews, Muslim and Christians have offered prophetic leadership ‘in such a time as this.’ 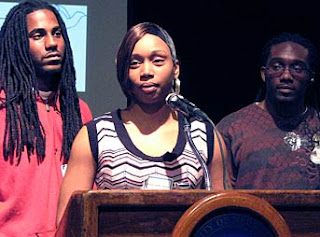 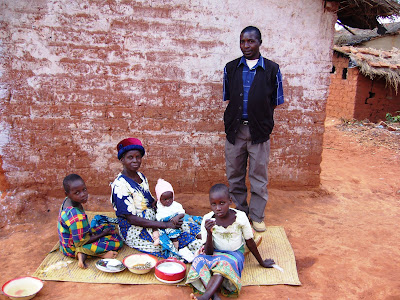 Pictured above is Pastor Copeland Nkhata and orphaned children with HIV/AIDS who needed food and medicine this month in Malawi. 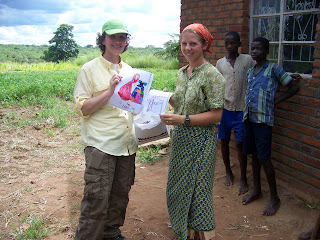 Stacy is one of several contributors to our orphan care project in Mzuzu, Malawi. She was tempted to spend her money for new LL Bean ski jacket that costs $199. Instead, she sent $200 to WorldHope Corps to help 12 children in dire need of food and medicine in time of AIDS and a global recession.

I just received this email update from our partner Copeland Nkhata, pastor of the United Methodist Church in Mzuzu, who with his congregation cares for over 60 orphaned, abandoned, and vulnerable children in the neighborhood.

THIS IS FOR STACY.

I thus report that the US$200.00 from Stacy was used in the following way:

1 Felex and Emily --a sibling headed family. They are hiv/aids victims but very zealous for the Lord.

2 Towera and Elia a very vulnerable couple with 3 children. They have zero income a month but a tried christian family.

3 Witness Mwale is a woman with 6 children at one of our rural churches on the way to the lake. She is very vulnerable but a blessing in church.

4 Elton an orphan in form 4 needy and often left alone on account of his economic situation. He is such a lovely boy though.

5 School materials for Rachel an orphan who really needed help at the time this money came. She now is at the university.

6 Medicines for Asante-- one orphan who is hiv/aids positive in the Hope Home program.

I and the leadership of my church are happy that Stacy and you Mike decided to bless our circuit in this way. May the Lord always remember you and multiply your resources.

Love to you from the recesses of our hearts. Some day I will send you their pictures. Its the lack of a digital camera that hinders me from remmiting pictures in time as I always have to borrow from friends.


Others may want to support our Orphan Care program in Malawi during this season of global hardship. If so, please send your tax-deductible donation to

The Road to Mzuzu 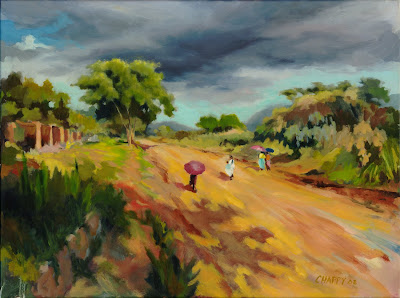 Most women(but not men)in Malawi have to walk several miles to collect clean water from the nearest well, or make due with water puddles and streams nearby. They carry heavy containers on their heads back to their own village which lacks potable water from a fresh, reliable source. This is why 1 our of 5 children die before the age of 5 from preventable, waterborne diseases. Contaminated water typically is collected from stale ponds and muddy streams.

Chappy Valente, a professional painter and entrepreneur from North Carolina, accompanied me to Malawi last Spring as part of the mission team. As we watched women collecting rain water from puddles on the ground to take back in buckets on their long journey home, Chappy captured a moment in time in the 'warm heart of Africa' in this delightful painting entitled "The Road to Mzuzu". 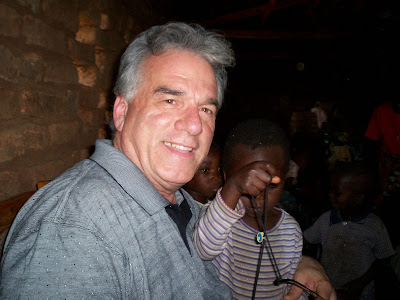 I asked Chappy (pictured above) if I could post his painting on my blog with the hope that our "Friends of Malawi" would find it inspirational; and might want to purchase a print to hang on their wall. And support the Malawi mission in the process.

WorldHope Corps, Inc. has made arrangements with the artist and his chosen lithograph printer and framer, to make quality prints available to WHC at a discount. We will pass on that savings to those who donate at least $250 to the Malawi Village Well Fund of WorldHope Corps.

A deep water well costs between 6,000-$10,000 depending on how deep the bore hole and how remote the village (see previous blog posts for details). It takes many individuals to contribute to the Village Well Fund to make a difference in the lives of 1000+ villagers who need access to clean water. WorldHope Corps is committed to providing a total of 20 deep water wells in northern Malawi. So far, in partnership with CitiHope International, we've installed seven wells.

The 14"x18 quality prints of "The Road to Mzuzu" for donors are stretched onto the stretcher bars and ready for framing. They are certified, signed and numbered limited edition prints. It art with a conscience, and for a purpose: to provide a deep well for an African village without clean water.

Donations can be sent to
11 Ardsleigh Drive
Madison, NJ 07940

Let me know if you can help in this way.
Posted by Michael J. Christensen at Wednesday, October 01, 2008